Following the failure of both Man of Steel and Batman v Superman, many fans and critics looked to writer-director David Ayer’s Suicide Squad as some sort of beacon of hope, a promise of a better future. Unfortunately, the final product is a sloppy, predictable mess that somehow manages to remain both underdeveloped and overwritten throughout.

Almost immediately after they’re recruited, the team is sent to Midway City to prevent a 6000-year old witch known as Enchantress (Cara Delevigne) from opening a portal that will bring destruction to the world as we know it.

Suicide Squad barely registers as a movie. It’s more a haphazard amalgamation of scenes than anything even resembling a cohesive whole. This is almost certainly due to the fact that the film was edited by Trailer Park, the editing company that put together the film’s final two trailers. Scenes are merely jammed together as if they’re meant to match, but they rarely do, leaving an overwhelming sense of laziness. This isn’t helped by the uneven pace and constant tonal seizures as well as the odd, unnecessary use of nearly twenty songs, most of which fail to suit the scenes they’re attached to.

These glaring issues can at times go unnoticed thanks in large part to the success of a few of the performances. Will Smith shines as Deadshot, delivering the kind of “movie star” performance that only he can. He’s also the only character given a solid, sympathetic background. Robbie is also fantastic as Harley, nailing the psychopathic nature of her character and her unflinching devotion to the Joker, although she is saddled with the brunt of the film’s generally awful humor. Courtney surprises as Boomerang, vastly surpassing his bland turns in the likes of A Good Day to Die Hard and Terminator Genisys. The finest performance in the film, however, is given by Davis. She embodies Waller, perfectly capturing the brutality of the character as well as her cunning.

The rest of the squad is given little, or in the case of Slipknot, nothing to do. Flag is a stereotypical military type, and Kinnaman mumbles his way through the film. Killer Croc is fine but is brought down by dreadful makeup and his almost unintelligible manner of speaking. Katana is truly terrible from the start, given perhaps the worst introduction in recent film history. El Diablo is interesting enough until he’s sadly ruined by a rushed backstory and a hilariously ridiculous third-act twist. These characters also never feel like a true team, with the revelation that they need and respect one another coming all too soon.

The performance that will likely be discussed most is undoubtedly Jared Leto’s as the Joker. Reports of Leto’s behind-the-scenes antics have been circulating for months, creating high anticipation for the method portrayal of the iconic character. Alas, the Joker is featured in very little of Suicide Squad, relegated to a few jarring flashbacks tracing Harley Quinn’s origin and an entirely unnecessary subplot involving his attempts to rescue his love from Waller. That’s not to say that Leto doesn’t succeed in the role. No, on the contrary, he impresses, crafting a terrifying Joker with an entirely unique design (it looks particularly good in a brief but loving tribute to the work of DC artist Alex Ross).

Suicide Squad’s biggest misfire is its villain. Enchantress may be the worst villain of any recent comic book film, failing to elicit even a slight shred of fear. Her gravest sin is her lack of originality. She’s an ancient bringer of doom who wants to open a blue portal in the sky so she can punish the humans who have failed to worship her. We’ve seen it all before and better. She’s made even more intolerable by Delevigne, an early contender for the worst actress of 2016. Her performance boils down to bizarre shifts in accent and the most ridiculous dance movements ever put to film (she genuinely resembles a hula dancer in the film’s atrocious final act).

The film even fails to work as an action flick. Aside from the finale, the squad is forced to throw down with the amorphous minions of Enchantress (they were once human but have been transformed by either her magic or the workings of her brother, Incubus). Since they are essentially lifeless husks that can be mowed down in an instant, every one of Task Force X’s clashes with them is made devoid of any tension. Luckily, this is somewhat remedied by Ayer’s skillful, stylish direction, particularly in the first action sequence, but it’s not enough to prevent the sense of monotony from quickly setting in.

Suicide Squad is filled with interesting and somewhat successful parts. From Will Smith’s incredibly charismatic turn as Deadshot to an intriguing new Joker, there is much that deserves praise. Unfortunately, they’re placed in this film, an incoherent, chaotic jumble that fails to end the DCEU’s trend of disappointment. 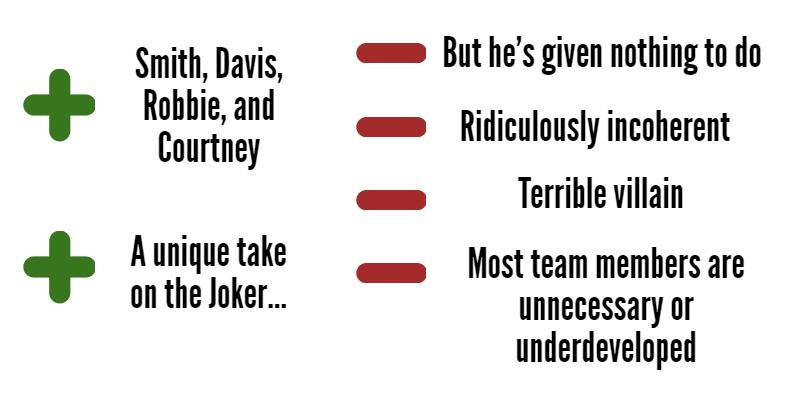