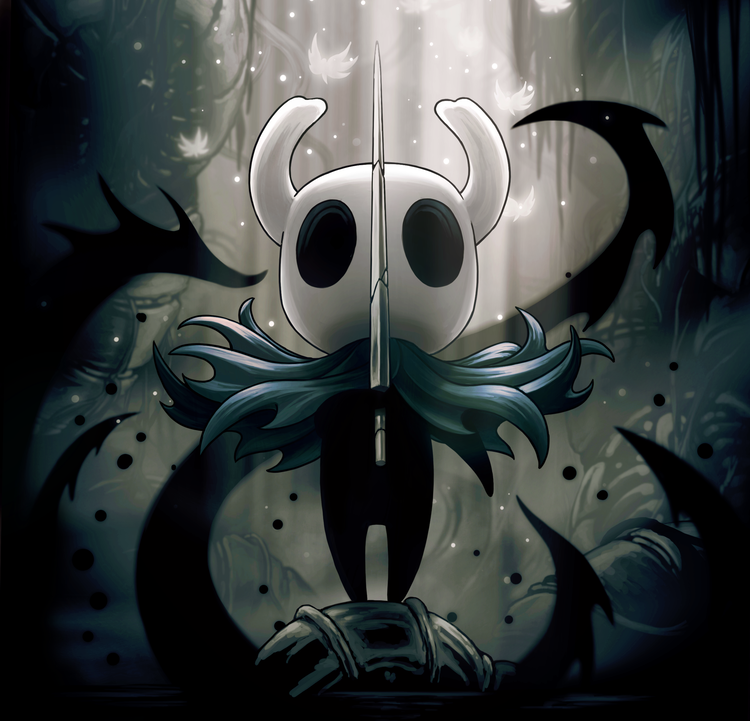 Going into Hollow Knight, I knew very little about the game, and that in itself was a blessing. The world, mechanics, story, and secrets were all a mystery to me, so being able to discover them and figure things out on my own was truly magical. All of it leading to a beautifully bittersweet climax that left me speechless. To anyone looking for a world to explore, challenging boss fights, and a fascinating world and story, this is a game I would highly recommend.

The game is very exploration centered. The lore of the world is never given to you directly, and it’s up to you as the player to piece it together and interpret it to your liking. My interpretation of the game follows our unnamed protagonist as they explore Hallownest, a once thriving underground kingdom now in ruin, its inhabitants infected by a mind afflicting virus that possesses its hosts. Your task is to uncover the secrets of Hallownest’s fading past, plunging yourself deeper and deeper into the ancient and abandoned caverns of the subterranean world. The lore is very complicated and I don’t quite understand all of it, so I suggest you either play the game yourself or do some research.

Hollow Knight is classified as a metroidvania – a 2D game centered around exploring a vast world, with a non-linear story and utility-gated progression.  One of the key facets of Hollow Knight is exploration. As you explore further, you gain new movement options like dashing and a double jump, which allow you to explore areas previously inaccessible. This rekindles interest in older areas because there’s now more to discover, and it also allows you to progress further into totally new areas. However, this generally leads to a lot of going back and forth, and confusion about where to proceed next, and, worse, getting lost, which some players may find tedious and frustrating to deal with. One thing I think this game handles really well is the incentive to explore. By intentionally leaving holes in your map, it encourages you to go out and fill them yourself. Exploring can help you find charms, which are equip able trinkets that grant just about anything, from extra damage output, movement speed, how much money or soul you earn from vanquishing enemies, and even offering new mechanics and special abilities. Exploration uncovers new enemies and boss fights, collectibles which can be sold for geo, (the game’s currency), materials you can use to upgrade the damage output of your nail. The game features a cast of characters that you encounter throughout the game, and I really enjoyed their inclusion. Each has their own arcs, characterizations, and connections to the story that make Hollow Knight seem more full.

Hollow Knight’s combat isn’t incredibly complicated. Wait for an opening, and swing. However, the game’s simple combat system far from hinders it, with every new encounter comes a challenging, engaging experience. You of course, have your trusty nail, and on top of that, there are spells. Spells are cast by spending soul, a liquid essence gained by hitting enemies with your nail. There are three base spells: Vengeful Spirit fires a blast horizontally across the screen. Howling Wraiths is a high damage multi-hit that covers a large portion of area above you. Desolate Dive sends you crashing straight down into the ground, damaging everything around you. Most importantly, there’s Focus, which allows you to concentrate soul to revive your health. However, it is a long process that renders you immobile and vulnerable for multiple seconds, which can easily lead you to get hit in the process of healing, so you have to exercise patience and wait for careful windows of opportunity to heal. As a bonus, the vast majority of charms you collect in the game are combat related, so it’s fun to mix and match charms, thinking critically about what combination will best handle the challenge to come.

I can easily say that Hollow Knight wouldn’t be half the experience without the incredible work done by Christopher Larkin on the soundtrack. It enhances all aspects of the game to a whole new level, perfectly capturing the air of mystique and fantastical wonder in this dystopian underworld. One of the most memorable moments in my playthrough was hearing the music gradually crescendo as I descended down into the City of Tears, and finally hearing the music swell as I sat on the bench, watching the rain descend upon the courtyard. The boss’ music in general was spectacular, and my favorite piece belongs to Hollow Knight’s final boss, which manages to be exhilarating, beautiful, and elegant, orchestrating the tense action and stunning emotion exceedingly well.