Hugh Jackman Bares His Claws for the Last Time With Logan

An aged man drunkenly stumbles out of the back of his limo, awoken by the sounds of some local thugs attempting to jack his car. Stubbornly, he tells them that it’s nigh impossible to get the wheels off. One of the group quickly reacts, plugging the man with a few shotgun shells and spitting at his body. The supposedly dead driver then stands up, warning the crew that it might not be in their best interest to mess with him as his three metal claws begin to appear, or at least two and a half of them. This is Logan.

Far removed from the campy, leather clad heroes of the main X-Men series, the film from 3:10 to Yuma director James Mangold instead opts for a shockingly rich character study of a man dogged down by guilt, a man who’s suffered through the pains of life for far too long. Along with stars Hugh Jackman and Patrick Stewart (stepping once again into shoes they’ve filled for 17 years), Mangold has stripped bare the superhero genre to craft not only 2017’s best film yet, but quite possibly the best comic book movie ever made.

Set in 2029, Logan takes place in a world almost entirely rid of mutants. With the X-Men all but gone, Logan (Jackman) is now working as a driver in order to care for the ailing Professor X (Stewart) whose failing mind has been labelled a weapon of mass destruction. That is until Laura (newcomer Daphne Keen) appears. A young, mute mutant with powers strikingly similar to Wolverine’s, she’s also on the run from the corporation that created her. Convinced by Xavier, Logan becomes the girl’s reluctant guardian on her journey to a supposed mutant haven known only as Eden.

Gore Verbinski Returns to Horror With A Cure for Wellness

Though the plot is decidedly simple, the same cannot be said for the characters. While Logan is certainly the standout (I don’t know that I’ve ever seen a more fully realized protagonist in an action film), he’s accompanied by an array of excellent supporting players. From the weary, ruined Xavier to the feral Laura and the deeply troubled Caliban (Stephen Merchant), each individual character is built with more care than is given to the entire ensemble of the average superhero film.

That level of quality extends to the cast. Merchant is revelatory as Caliban, the British comedian turning in a haunting performance that rises above all of his previous work. Keen is also fantastic in a make-it-or-break-it role, perfectly capturing the beast-like intensity of Laura with nary a line for much of the film’s running time. Narcos’ Boyd Holbrook is exceptional as Donald Pierce, Logan’s de facto villain, even if he’s given a somewhat thankless part.

Logan is owned by Jackman and Stewart, however, both veteran actors delivering performances that could generate buzz come awards season. Stewart is genuinely heartbreaking as Prof. X, providing one of the most authentic portrayals of dementia in film history, while also managing to maintain his signature dry wit. Jackman gives his best work yet here, finally allowed the opportunity to bring every ounce of Logan’s pain into the light, particularly in the final act. Rarely has a farewell to a beloved character been handled in such effectively earnest fashion.

Mangold doesn’t lose himself in thought though, as Logan features some of the best action in recent memory. Gory beyond belief, the film utilizes its R-rating to the furthest extent throughout. One second act sequence involving one of Xavier’s “mental spasms” is especially brutal, expertly twisting the powers of both Logan and the professor.

At one point in Logan, Prof. Xavier and Laura quietly watch Shane, a haunting western about the price some heroes must pay for their deeds. The connection could not be more fitting. Possibly the finest superhero film in history, James Mangold’s film is a brilliant reexamination of the genre with visceral action, terrific performances, and shocking emotional depth to boot. 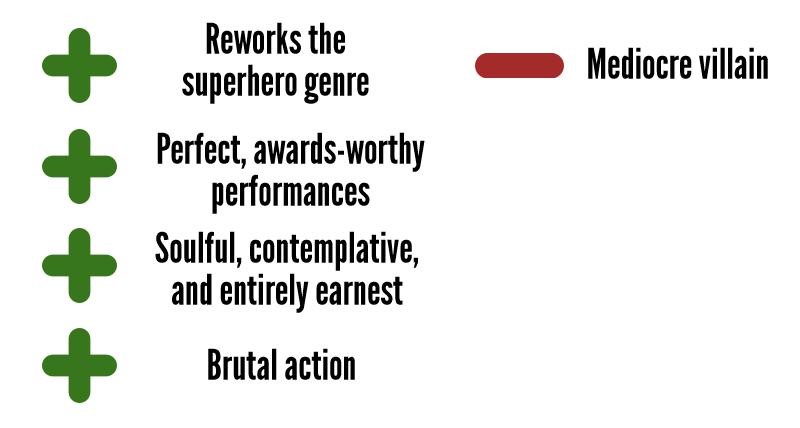