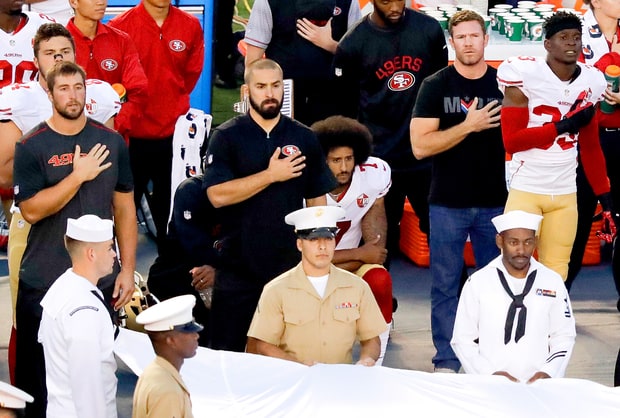 What it REALLY means to take a stand

Colin Kaepernick, quarterback for the San Francisco 49ers, has drawn attention to the National Football League (NFL) since he is the start of a quickly growing movement.  On Aug. 26, Kaepernick chose to take a knee instead of stand during the National Anthem, before a preseason game against the Green Bay Packers because he believes there is a large amount of racial injustice in the U.S.  “I am not going to stand up and show pride in a flag for a country that oppresses Black people and people of color,” said Kaepernick in a NFL interview after the game.

The attention Kaepernick has received should be devoted to the American flag and all the heroes who have given their lives for U.S. citizens.  The point that Kaepernick is trying to make is understandable and should be acknowledged by Americans.  Issues like police brutality and racism are very real in America.  1,000 people were shot and killed at the end of 2015 by police alone.  It is not a problem that Kaepernick is trying to draw attention to it however it is his way to do so that is posing controversy.  Kaepernick has put the movement in the spotlight. The way he did it however, was nonsensical and is just a distraction to what that moment should truly be for.

Kaepernick, famous winner of the 2013 “Best Breakthrough Athlete ESPY”  and “NFL Honors- Greatness on the Road” awards, could have called attention to his ideals in different ways, which would not take the attention away from our soldiers and flag.  Kaepernick currently has 951,000 followers on Twitter and 1.4 million on his Instagram account.  He has a large following that he easily could have reached out to to share his thoughts in a more respectful way.  Many celebrities such as Beyoncé, Snoop Dogg, and Macklemore have shared personal beliefs and ideas through social media, since it is an easy and appropriate way to connect to many people.  Kaepernick could have also shared his thoughts in an interview or press conference.  Either one of these ways would have gotten him the attention he craved and would have caused less backlash towards him or the NFL.

The first amendment gives all American citizens the right to free speech and the right to protest peacefully. Subsequently, Kaepernick’s actions are acceptable within the U.S. legal system, but that does not necessarily make it right.  Kaepernick’s protest is making it seem like he is showing extreme disrespect to America, the country he makes about $19 million a year in, and he will continue to do so despite the presence of racism in this country.

Ironically, Kaepernick’s movement seems to have the opposite correlation to what he is trying to prove.  By protesting the National Anthem, he is protesting the shared values that all Americans have, which is our sense of national pride.  The National Anthem brings people together in whatever facility they are in, and represents the pride of being an American citizen.  Kaepernick is trying to bring people together, but what he does not seem to understand is that the National Anthem is already doing that for him.  By refusing to stand, it is coming across far more as a way to make himself seem better than the country that he is thriving in, than trying to start a trend of equality.  Not only that, but Kaepernick created an extreme sense of anger and frustration when he, along with other NFL players, continued their protest on the 15th anniversary of Sept. 11.  Out of all days, this should be the day when as a country,  problems  are put on pause and people pay their respects.  This should be a day to honor the men and women that lost their lives and respect the soldiers and first responders that put their lives on the line, and continue to do so every day for our freedoms.  However, Kaepernick did not seem to take that into account and continued to disrespect our flag on that sacred day.

Kaepernick is not backing down at all, players from the Miami Dolphins and Seattle Seahawks have already joined his movement and there are no indications of it slowing down anytime soon.  Chip Kelly, the coach of the 49ers, told the NFL that “it’s not my right to tell him not to do something,” and reportedly there has been no discussion of benching or cutting Kaepernick from the team. If Kaepernick had the courage to not stand during the National Anthem on Sept. 11 and there is no backlash from his coach, he will most likely continue this protest until he sees significant change.  How much change he wants to see is not quite clear, but what is clear is the disruption towards American patriotism.