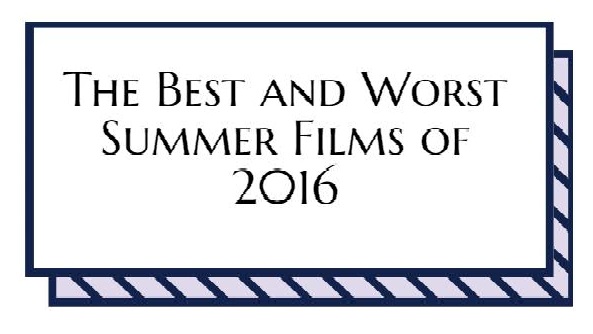 The Best and Worst Summer Films of 2016

What happened to the summer movie season? As the most disappointing in a decade, this season was packed with failure after failure, letdown after letdown. However, there were several exceptions, mainly in the realm of independent film. This rotating list (one of the best, then one of the worst) will count down the five best and five worst films of June, July, and August of 2016. Let’s get to it! 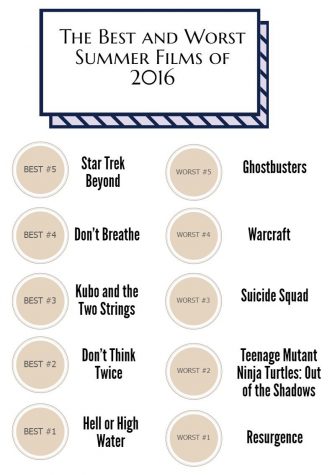 Arguably the finest film in the most recent Star Trek trilogy, Star Trek Beyond is the closest to the original series in tone. Director Justin Lin’s film is endlessly entertaining, but it’s also surprisingly thoughtful; it returns the series to its progressive-minded roots without sacrificing the mind-blowing action audiences expect from the franchise.

Though nowhere near the disaster many were expecting, Paul Feig’s Ghostbusters reboot is nonetheless a largely unfunny, tepid comedy that fails to generate the manic energy of the original film. It’s not without its positives since Chris Hemsworth and Leslie Jones shine throughout. However, they are drowned in a sea of under-cooked CGI, thin characters, and dull one-liners.

One of the most inventive horror films in recent memory, Fede Alvarez’s Don’t Breathe is a remarkably tense experience. Featuring terrific performances from Jane Levy, Dylan Minnette, and Stephen Lang as the film’s atypical characters, it is a thriller that challenges audiences to pay attention, and gives them good reason to.

Based on the multiplayer video game World of Warcraft, many saw Warcraft as a contender to be the first successful video game movie. Unfortunately, it failed to meet those expectations. Thought it may be the best filmic adaptation of a game yet, it’s still far from solid and is chock full of on-the-nose references to the series, wooden performances, and laughable costume design.

The best animated film of 2016 so far, Laika Studio’s Kubo and the Two Strings is an incredible adventure film. One of the few stop-motion animated films in recent years, Kubo is a visual stunner, each and every motion beautifully rendered. This star-studded epic manages to be both a rollicking good time as well as a deeply melancholy examination of loss, prejudice, and parentage, a brave choice for a film of this genre.

Among the most incoherent films ever made, director David Ayer’s Suicide Squad is ridiculously messy. It is a shock that it was released in theaters. From the unnecessarily convoluted plot to Cara Delevigne’s sad excuse for a villain, it is a stunning disappointment that, while entertaining in spurts, fails to work as a cohesive whole.

Writer-director Mike Birbiglia’s second outing, Don’t Think Twice is a heartwarming but unflinchingly realistic examination of the world of improv comedy. Starring Keegan Michael-Key (Key and Peele), Gillian Jacobs (Community), and Birbiglia himself, it is a film that depicts life as it is, rarely, if ever, succumbing to the cliches of a modern romantic comedy. Oddly reminiscent of classic Woody Allen works, Don’t Think Twice is an exceptional film that announces its creator as one of the finest comedic voices of his era.

Worst (#2): Teenage Mutant Ninja Turtles: Out of the Shadows

Following the disaster that was the 2014 Teenage Mutant Ninja Turtles, Michael Bay and co. had nowhere to go but up, yet they still managed to find their way down. Packed with an unending exposition, stale villains, and some of the most cringe-worthy dialogue in modern film, this unnecessary sequel is an unmitigated trainwreck from scene one.

David Mackenzie’s Hell or High Water is not just the best film of the summer; it’s the best film of 2016, period. A white knuckle crime thriller about a pair of bank robbing brothers in central Texas and a Texas Ranger on their trail make it lean and mean, with a quick pace and brutal violence. However, it is the film’s ruminations on brotherhood, aging, and impoverished life that help make it the unforgettable masterpiece it is.

1996’s Independence Day may not exactly be the epitome of classic film, but it remains a beloved disaster flick due to its dopey earnestness. That’s something Resurgence, it is long too belated sequel, sorely lacks. What it is not at a loss for, however, is awfulness. The rehashed plot, countless extraneous subplots, and the outdated action sequences make it a lifeless bore that, in a world in which a franchise continuation like Mad Max: Fury Road can exceed the wildest expectations, is frankly inexcusable.