Captain America: Civil War Lives Up To Expectations (And They Were High)

Captain America: Civil War opens with a literal bang, one which takes the lives of several innocent civilians. Shedding light on the casualties brought on by the Avengers, this tragedy results in the United Nations drafting the Sokovia Accords, a deal that would bring the superhero team under the control of the UN. Those in support of the Accords are Iron Man (Robert Downey, Jr.), Black Widow (Scarlett Johansson), Vision (Paul Bettany), and War Machine (Don Cheadle), whereas Captain America (Chris Evans), Hawkeye (Jeremy Renner), and the Falcon (Anthony Mackie) take the opposition.

There are so many places Civil War could go so very wrong, but directors Joe and Anthony Russo (The Winter Soldier) have once again proven their near-perfect understanding of this universe and its characters. They’ve managed to craft a film chock full of explosive action that somehow never loses sight of the humans at its center.

Each character’s human qualities are what shines the most in the film. There is never a single moment in which both sides of this fight aren’t completely understandable, allowing for a feeling of uneasiness as each viewer struggles to choose who to side with. Although Captain America remains the crux of this series, every other character from Iron Man to Bucky Barnes (Sebastian Stan) have clear, defendable motivations for their actions. Unfortunately, there can be too much going on at times, particularly in the setup-heavy first act. 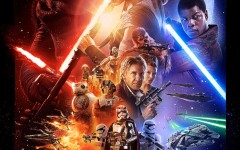 The performances in this third entry of the Captain America series are truly exceptional. Evans continues to astound as Captain America while Downey brings a new level of sorrow to Iron Man. Stan, Mackie, Cheadle, Bettany, Johansson, Renner, and the rest of the superpowered cast which includes Elizabeth Olsen as Scarlet Witch and Paul Rudd as Ant-Man are all fantastic, particularly Rudd and Olsen. The mysterious villain Helmut Zemo played by Daniel Bruhl is an outstanding depiction of a man who utilizes psychology, not brute force, to break the heroes of his time.

While many of the aforementioned performances may have impressive, the real stars of Civil War are its two new additions to the Marvel Cinematic Universe: Spider-Man (Tom Holland) and Black Panther (Chadwick Boseman). Holland’s wall crawler is the best interpretation of the character we’ve seen yet, as he plays a cocky yet endearing punk whose mouth runs just a little too fast for his own good sometimes. The Spider-Man suit, heavily inspired by the classic Steve Ditko design, is incredibly breathtaking both still and in-movement. Boseman’s Black Panther is equally terrific, showcasing both the royal and human aspects of the character’s personality, while also pulling off the catlike action necessary for the role expertly.

All of this comes together in an airport-set action sequence, which closes the second act in spectacular fashion. Having had several other films to understand these characters, the audience actually cares when they inevitably collide. The battle itself is truly one of the best action scenes put to film in the last decade, satisfying any fan of the Marvel franchise.

Captain America: Civil War is a terrific film filled to the brim (at times, it unfortunately goes over that brim) with jaw-dropping action, exceptional performances, and welcome humanity and depth. The film sets itself apart from the crowd, as it may be the best comic book movie since 2008’s The Dark Knight.