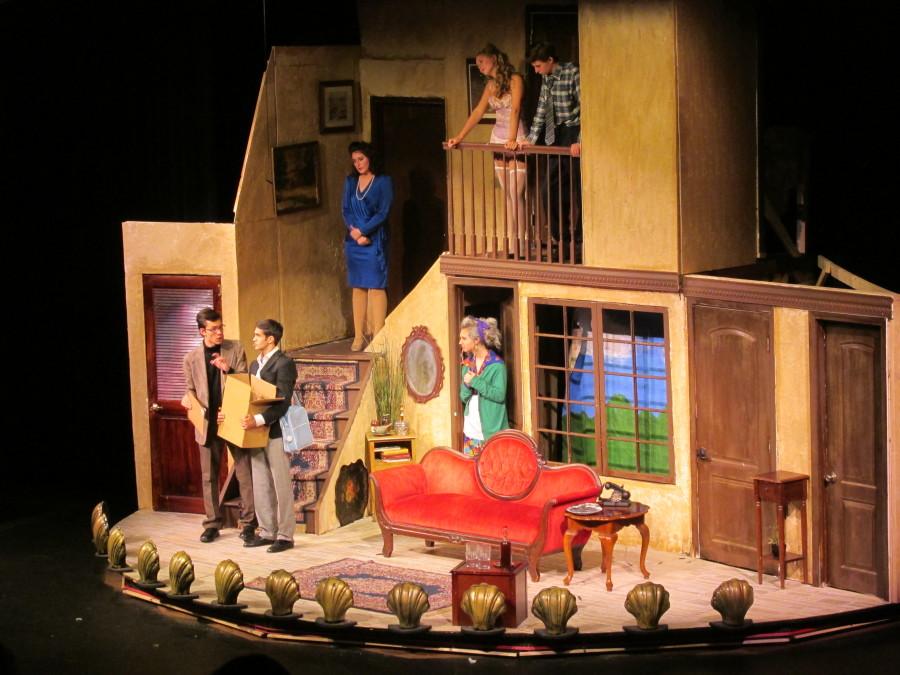 Stage managers are running on and off stage as a sarcastic director yells stage directions from the audience’s seats. A quirky medley of characters, featuring an actress who always seems to lose her contacts, an actor who gets nose bleeds at the sight of violence, and an elderly actor who is usually accompanied by a bottle of whisky (to name a few), made Rambunctious’ Noises Off a must-see for the Robinson audiences on November 19th-21st.

Noises Off is a three act farce about the comical mishaps that occur while putting on a theatrical performance. It features a play within a play called Nothing On, which the audience sees performed as a dress rehearsal in Act One.  Act Two is set from backstage during a matinee of Nothing On and is carried out mostly through non-verbal, bold movements backstage. In the third act, the audience is returned to the mainstage of Nothing On for its closing performance. In all three acts, the tangled romantic relationships of the characters of Noises Off weaves into Nothing On, making the audience and the characters wonder how this show will go on.

Noises Off proved to be an incredibly difficult performance, due to its fast paced nature and rapid stage cues. The story focused heavily on character development, as each actor on stage played two roles, one role in Nothing On and another in Noises Off. This placed a heavy emphasis on the casting of this show for Director Meghan Thrift.

“Because this show is so particularly difficult, I needed actors that I knew were elastic and had a high attention to detail,” said Thrift.

The complex, two floor set for this performance also had to display the show from the two perspectives, adding another level of difficulty for the set construction crew. Set Construction Chiefs Sam Rudy and Jeffrey Wagner utilized a revolve, which is an elevated circular stage that spins by an offside motor.The set also included many entrances and exits for the actors due to its farcical nature, requiring the use of seven doors and multiple staircases built by students.

Noises Off incorporated some adult elements, such as a character in her underwear and an alcoholic, which resulted in the show’s PG-13 rating. The comedy did not specifically focus on these particular themes, but used them to enhance the physical humor of the show.

A few particular noticeable performances can be attributed to the dynamic relationship between the characters of Gary and Freddy, played by RJ Pratt and Matthew Ross. In the second act, Gary believed that Freddy was involved with Gary’s romantic interest, yet Freddy was completely oblivious to the situation. Matthew Cook, who played the ever so sarcastic director of Lloyd Dallas, kept the audience very entertained with his complicated love triangle affairs.

The only downside of the show was that at times it was difficult to understand the actors since they either spoke very quickly or too softly. However, this issue was only noticeable during certain parts of the show.

Rambunctious’ decision to perform a farce proved to be a very successful one. The actors received positive responses from the audience, as they laughed at every joke and gave the performers standing ovation, making Noises Off a hit.

“I think right now we could all use a good laugh. The beginning of the school year is tough. The current events in the news, in the community, and in between can be tough. Sometimes theater just needs to exist just to make us happy and to let us forget about our problems.” said Thrift.

Noises Off will soon be making its Broadway revival in January, allowing Robinson audiences to compare our own performers with the actors in New York City.