Night Must Fall – Covering the Dark Side of Drama 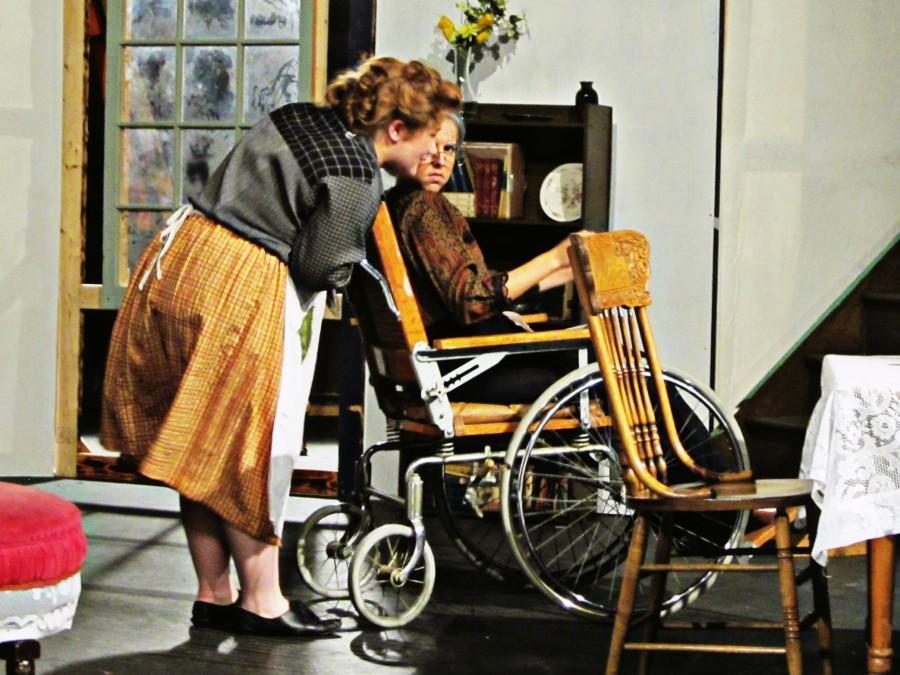 Last year, senior Carys Meyer donned a hairdresser costume and contributed to “Midsummer/Jersey’s” hammy humor. However, in this fall’s production of “Night Must Fall,” she stepped onto a stage full of shadows.

Running from Nov. 15 through 17, “Night Must Fall” revolved around the relationship between clever Olivia and hired companion Danny, a murder suspect.

Meyer said her starring role as curmudgeonly homeowner Mrs. Branson was quite enjoyable, since it allowed her to portray a personality so different from her own.

“I had a feeling the audience would be annoyed at Mrs. Branson by the end of the show,” Meyer said. “I got to yell and bark orders in a different accent and voice, and [my costars] had to push me around in a wheelchair.”

Senior Ivonte Milligan, who played Danny, said he studied his character carefully before performing because his serious role hid depth.

“The most challenging part of the play was getting into the mindset of what I should be as my character,” Milligan said. “He gets mad, sad, cries, and throws tantrums. You always have to study what the character wants, what they desire, and what’s their next move.”

“Night Must Fall” gave Jackson Viccora, senior and drama production veteran, his first chance to work backstage. Through helping multiple crews handle costumes, props and paint, he said he was able to boost the play to a higher level.

“I had an outsider’s view of how to work backstage, but it was more complex actually working there,” Viccora said. “Flexibility as an actor and backstage—it’s an important element of a production to help each other out.”

Garnering interest in “Night Must Fall” was the job of Sarah Irving, junior and publicity manager. She said she helped design the play’s theme with the murder mystery genre in mind.

“Because it was a murder mystery, we stylized the publicity materials very bloody,” Irving said. “Toward the end, we took more period approaches, dressing the cast in costume and taking photos.”

Though Irving said she was disheartened more people did not attend “Night Must Fall,” serving as publicity manager was still a positive experience for her.

“It’s always hard to sell fall productions, and this one was a little sore for me,” Irving said. “Last year, we had three full houses, so dealing with occasionally sparse attendance was kind of disappointing. But I always had fun backstage. It’s a lot of fun to work with people you already enjoy.”

Reflecting on “Night Must Fall,” Viccora said he believes the cast and crew’s cooperation ultimately led to a satisfactory final product.

Viccora said, “Chalk this up as yet another success for the ever-consistent drama department.”